Gurmur will have a new friend...

So, whenever I wake up tomorrow I'll close the iPad open beta and click on some buttons to release the iPad version on the App Store.

I'm also tinkering with the next version and there will be a new boss. There will be other things as well that I won't tell just yet but one of the things that will happen is that I'll take a look at the Epixx.org highscores some time at the end of January, and the top players will end up being listed in the game before the highscores are reset (only the best entry for each name is listed).

Cursed Scroll of Time Warp will no longer reset the turn counter in 2.05 and in order to start the final battle, you will have to finish Gurmur and this new boss, and something else I won't tell just yet. 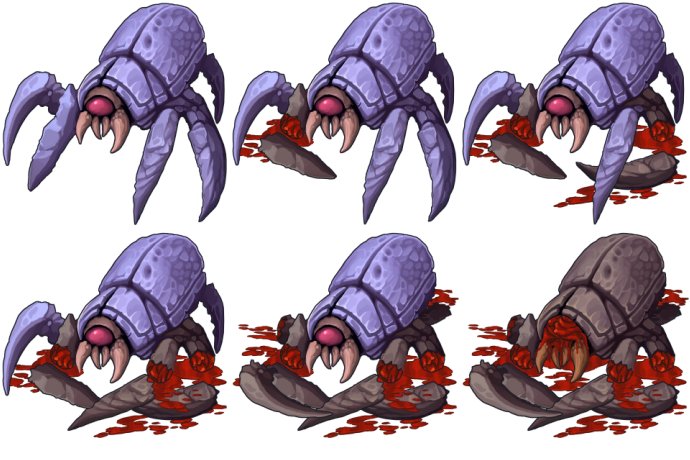 So, the latest build (201206) was accepted to the App Store and I'm planning to release it on December 31st. It may take some time to process it but it should be available on January 1st, 2021.

I finally joined the Apple developer program and uploaded my first iPad build to see how things work there.

Now I could use some feedback and for that I'm running an open beta starting today and ending on December 31st, 2020. If you would like to try the beta, launch Safari on your iPad and click on the following link: 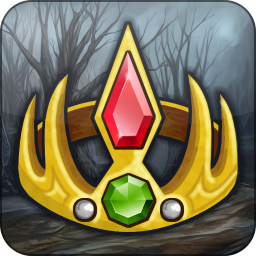 The link takes you to a page where you can install Testflight, which is Apple's beta installer app, and it should then be able to install Rogue's Tale on your iPad.

If you have any questions or feedback about this, please contact support at epixx dot org.

- Added curio vendor in the Market Quarter that allows you to spend card dust on various items.
- Added a bag of transmutation and some transmutation recipes for the owners of The Hoard DLC.
- The amount of card dust is now stored in Steam and shared across all characters, offline or online.
- /mrgsteam command works with cards now and they can be restored just like heritages and challenges.
- Added a touchscreen user interface (can be enabled in the settings).
- Reduced the amount of extra gold in chests and skull piles by 50%.
- Charisma popup now shows values based on charisma instead of stamina. - Scroll of Teleport should no longer allow intimate relations with boulders or other objects.
- The Curve Ball challenge should no longer trigger if Melee/Thrown weapon is used in melee.
- Hotkeys no longer work while inventory is shown (and it shouldn't be possible to shapeshift while dungeon merchant is identifying your stuff).
- Cursed rings and amulets are now excluded from the collector heritage rewards.
- Fixed various creature spawns that caused them to become invisible (too many creatures at once).
- Once player has defeated Bebe le Frog, any further playthroughs will skip the "tutorial" card battles.

Friction increases card cost by 1 when the card is played and it is removed at the start of the next turn. This was added to prevent infinite turns that certain 0 cost cards could do.

- Added a refresh rate selector in the settings that defaults to 30.

There's 4 possible values that can be given, 20, 30, 60 and 120. Changing the refresh rate higher or lower can change the speed of the game slightly depending if there's enough juice on the rig. This used to default to whatever your monitor supported (60 in most cases) and if things feel slower than they used to, change the value to 60. I probably wouldn't use 120 even on a gaming rig just to save penguins from global warming but it's there anyway.

- Added a new quest, boss and a challenge.
- Increased the health of almost all quest bosses.
- Ursus Horribilis should now unlock with humans only.
- Upgraded Wand of Channeling should now work in the card game.
- Game sounds should no longer play if the player is deafened.

The card game was played through so fast that I decided to add a new challenge in the game. This challenge involves starting a quest at or below level 5 and then surviving 30 dungeon levels without toilet breaks before being crushed by the new boss, named after the player that crushed the card game first.

I can tell you that this challenge is not casual content. You will need most heritages unlocked, you will need to milk everything out of Woof and you will need truckloads of skill and luck to survive (knowing every detail about various items doesn't hurt either).

The quest dungeon is crumbling and once you go down a level you can't come back up but there is a merchant at every 5th dungeon level that can identify items for you. That is assuming that you can keep the merchant alive because they don't have any henchmen with them.

Unless you start the quest with a scroll of time warp, there is no way to return unless you defeat the boss (who just happens to carry one).

- Added a new way to die horribly.
- Illusions can no longer be cloned (and crash the game).
- Mother of Drakes challenge should now unlock correctly.
- Auras that kill something should now redraw the area.
- Face Muncher should no longer unlock with non-humans.
- Mixed weapons (melee/thrown) can now be used to unlock The Curve Ball.
- Cheesy Musk description now tells that it doesn't work with spells.
- Fixed a map generation bug that could place an item in a chasm.
- Added sections 1776 and 1984 in the Terms of Use (privacy stuff).

There's a collectible card game in the game now and playing that may end up killing you horribly. You may ask what does a card game have to do with a roguelike game and to be honest it's just as big a surprise to me as it is to you. Sometimes things just happen and this time the game had a surprise pregnancy that resulted in a weird offspring. 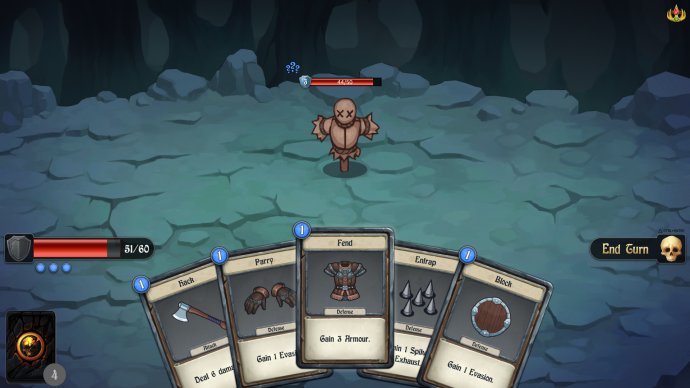 Well, there will be a new update at some point later this year. I'm not sure when exactly because it is somewhat large and a lot of stuff is still required. This is just a heads up because I will have to test it in Steam at some point and when I do, I will also have to add all those ~250 "things" that can be unlocked and then it would be obvious that something is going on.

The update is for the base game and if you happen to have it then all you need is a few hundred hours to unlock everything.

- Certain random levels such as mazes are now limited to small map size.
- Added a new talent that can be learned by drinking a Cursed Potion of Literacy (*).
- Added a new heritage related to this new talent.
- Changed graphics setting from "super-duper-high-quality-for-no-good-reason" to "high-quality".

The graphics quality setting of the game engine was apparently set to bananas and by setting it a little lower two things should happen on most computers: it should run smoother and it should run cooler (fans should make less noise etc).

(*) Note that it's been possible to bestow curses on items for quite some time now and it hasn't been mentioned anywhere (whoopsie, the secret is out now).

Oh, and if you do drink one of them potions, try to have one extra talent point because one of your talents is forgotten and if you don't have a spare talent point, your build could go horribly wrong. At the same time make sure you do have at least one talent known because the potion does not work unless it can remove a talent.

- Added a tip of the day to remind about /mrgsteam command.
- Removed some other tips of the day that were no longer relevant.
- Added a new tutorial entry that tells about the chat button.
- Added visual aids for some tutorial entries that shows where to click.
- Fixed a bug that prevented some tutorials to trigger at the earliest possible time.
- Changed the "rest / use stairs" mouse click area over the player (see the image below).
- Mouse cursor now changes slightly when it is near the player to hilite the click area.
- Added a touch screen user interface for mobile devices with 4:3 resolution (rhymes with my pad).
- Added a new implementation of the game manual for said mobile devices.
- Fixed a typo in one of the failed rest action texts.
- Repelling Smite no longer attempts to push back corpses.

I know that UI changes can be annoying and mouse is accurate enough to hit the player without the extra space around. If this change makes it too annoying to play with a mouse, I'll change it back or add an option to use either. At the moment I'm just trying to find a balance between mouse and touch UI and try to keep the code purdy. 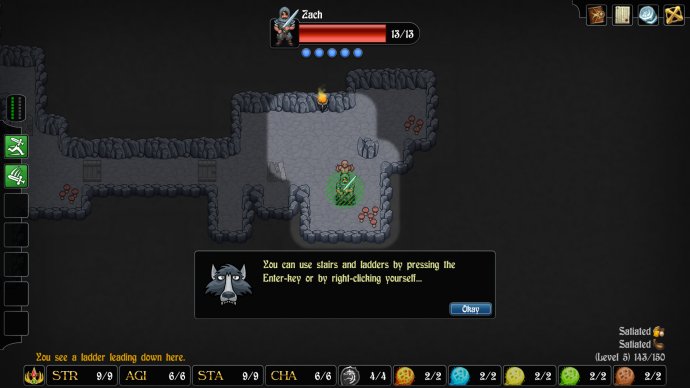 - Ctrl + left click now stores all gold coins in the player's inventory.
- Fixed a bug with the enchant window that made the choices invisible.

Something bad is coming your way...

When you are stuck behind four walls for a month and the world has gone full bananas, this is what comes out of it. Looking at the bright side, 2.02 is right around the corner with some new content for The Hoard DLC owners.

- Dragonhide Helm is now the only closed helmet with +3 max cast modifier.
- Bear traps, spike traps and spiked pits can now also cause dungeon fever.
- Added a new base game heritage to lower the chance of being infected by said traps.

- Ranged weapons are now automatically equipped when looting if you have matching arrows equipped.
- Chat console can now be brought up with the mouse by clicking on the bottom left of the combat log.
- Inventory and loot windows should now have only one item cursor visible at a time.
- Enchant window now updates the loot tip window when shown.
- It's now possible to discard items with drag-and-drop when trading in town.
- Arcane spell learning should now work as it was intended (third time's the charm).

So, if you remember being added in the game as a side quest or encounter boss, throw some spam to support at epixx dot org and you'll get to break the game early. It's been a while since the original beta and I'm not sure if those emails work anymore.

The new bosses in the DLC are called Balthar (Beltar...), Ch'Ri and Skaldir. Throw some spam or contact through Steam and I'll try not to dismiss all.

Another year, another video...

The release date for Rogue's Tale - The Hoard DLC is February 20, 2020 and here's a short video how to unlock two of the five stash boxes that come in it.

Most players have already done this and they will have those two boxes unlocked when they enter the town. This video is meant as a reminder or tutorial how it can also be done (casual mode for the win).

It's the first narrated video I've ever made and unfortunately I used a simple headset so sound quality may not be the best ever.