Most of the DLC content is ready now. It took a little longer than I thought in August because I have been doing this quite casually due to reasons. Anyway, one more quest to do and then it's time to do some testing and finishing up.

I originally planned this for the end of the year but there's still so much to do that Q1 2020 is closer to the target.

This thing, Ch'Ri the Blingstealer, will be the middle boss when considering difficulty. The image shown below depicts the arena at the end of the battle. It has an ability that relates to its name and some health but it doesn't hit very hard. Its health multiplier is 1000. Normally bosses have a health multiplier of 5 (so, yes, bring some blessing scrolls if you plan to melee it down). 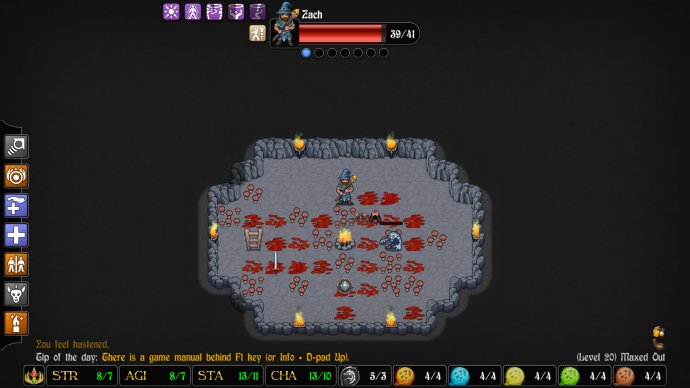 Here's a sneak peek of one of the new quests in the upcoming DLC.

Balthar the Familiar will be the easiest quest boss to kill. It will have some more tricks besides the mana burn shown here, just to make the fight a little more claustrophobic. In the end, zar can be only one standing in the library.

Balancing of the bosses' abilities is still in progress as you can see in the video. If a semi-naked test wizard can almost kill a boss simply by spamming one spell, the boss needs some love.

And the temperature is finally coming down to a level where it's possible to sit in front of a computer and do stuff.

Anyway, as some of you may have noticed that there is now a box showing DLC's for Rogue's Tale on Steam and that's because I'm slowly starting to make one. I haven't set a release date yet but a few months should be enough to get everything done. Below is one of the many things coming in that DLC. 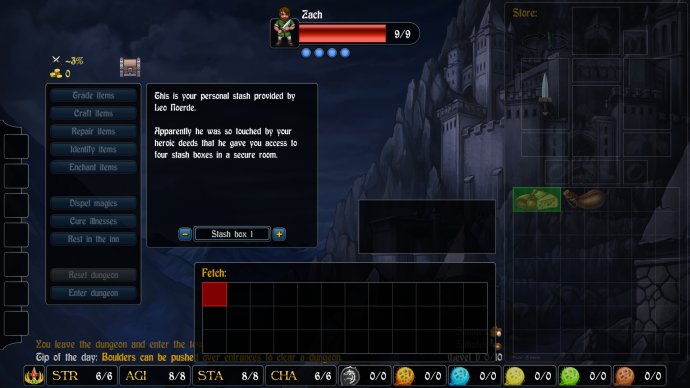 Gone but not forgotten...

I did some cleaning up on the front page and moved the old version game manual and scores here. Those 1.15 highscores now include kings and queens of the past two years and now it has them all from November 2012 to June 2019.

While cleaning some dust and cobwebs off the website I also noticed that in a few weeks this little project turns 10 years old. That's when I started scribbling stuff on paper as to what kind of things there should be.

Beta 2 is coming to an end in a couple of weeks and then there's only 2.0. I got the manual ready earlier today with its 43 pages (or ~120 if you count each column as a page) and then there's just a few bugs and finishing up the Mac version.

Yes, I did say Mac version. There was a sale about a week ago and I snatched the cheapest air thingy to see if the game even starts on it and to my surprise it was semi-playable. Of course there are some issues with gamepads since every single system must have their own way to handle them because reasons but I'm sure they can be resolved.

Then the bad news. I didn't join the Steam summer sale this year because the price is going up when 2.0 is finally done. I'll probably roll a D3 and add that many bucks to the price to pay for the SmackBook and also the TuxBook I bought about two months ago for the Linux version. Also, those three players that end up being bosses in the game will do so after 2.0 in the next content update. 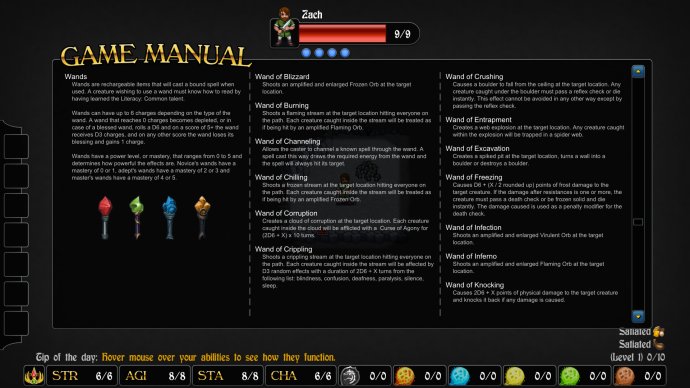 At some point tomorrow, the server will be wiped clean and updated to 2.0. The new beta version will be made available on Steam when that happens.

Everyone interested in playing on the server will have to create a new account there, start a new character and then type /mrgsteam to unlock previously unlocked heritages and challenges.

The old 1.15 demo version has been replaced with the old full version in the downloads section even though 2.0 isn't ready yet.

I'm converting the server code to work with the new version and adding some new content that was left out in the first beta. When those are done in approximately 4 weeks, the second beta will start and the Epixx.org server will be wiped clean.

So, around June 15, all existing accounts and characters will go poof.

After that you can create a new Epixx.org account, create a character and type in a command that merges your Steam achievements with the new account.

When 2.0 is finally ready, I'll replace the current demo version with the current full version. I'll also add a branch in Steam that allows the old version to be run from there just like the beta is run now.

Oh, I almost forgot, in the past players have found their way into in-game characters through completing something in the game first but during this beta it requires finding a game breaking bug and describing the exact steps how to reproduce it. So far, two new bosses have been named and their unique abilities decided.

Well, perhaps we are.

I'm not exactly certain whether it is visible to all Steam accounts, but if it is, then here's what you have to do:

1. Restart Steam.
2. Right click Rogue's Tale in your library, select Properties, Betas and opt into "test - Public test branch".
3. Try not to stay up too long.

Thanks to Unity's awesomeness, there's a Linux version available as well. Unfortunately the PS4 gamepad is disabled in the Linux version because almost all of the buttons and axes were mapped differently there.

There's two heritages that can't be completed yet because the two new spells schools are not in it so you can't learn those spells. They will be added in the second beta with all the other missing stuff. Heritages have been made easier and most of them can be completed in casual mode and it is now the default mode when you start the game for the first time.

If you find any nasty bugs, please report them in the Steam forums and add some kind of identifier in the title e.g. "[Beta 1]".

If you can't get the test branch to show after a Steam restart, then it probably won't work until next week (it's past midnight here now and I'm off to have a weekend without computers).

So, I'm a PC gamer and three days ago I had never plugged a gamepad of any kind on a PC. Then I did it just to see if it requires some drivers or whatever and to my surprise all it took was a reboot and that "Simple HID" was installed. After some oogling, inkscaping and keyboard massage, something happened and now I have played a few minutes with a gamepad on a PC.

Anyway, here's a short video showing how the game works with a PS4 DualShock controller (there's a few other new things as well). Unfortunately, at least to my understanding, every controller has its own driver that decides what kind of input they send out and it means that only PS4 controller is supported on Windows for now.

I also have a few screenshots in different resolutions to give you an idea how the new version looks on larger screens. 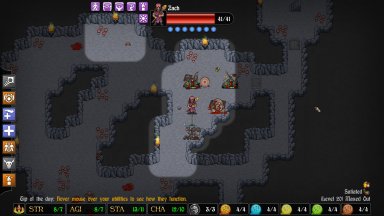 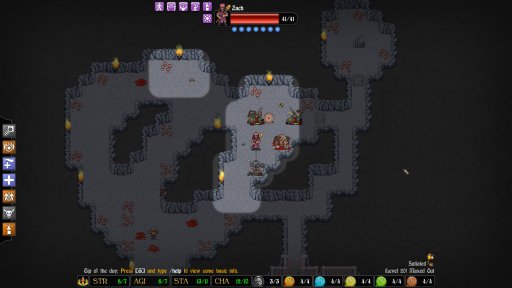 The final battle is now ready and all new items have been implemented. The first beta will take place sometime in May (offline Windows only) and it will last until there is a second beta later with Linux and some of the new content.

There will be a way for players to merge unlocked achievements from Steam to a new or existing profile after the second beta but the betas itself will be using new saves.

No new videos this time. I've been working on rebalancing the main quests and it takes some time when you have to play them through a hundred times but at least it's not possible to one shot Gurmur anymore.

There's been a lot of power creep in the past updates and adding four new pieces of armour does not help. Therefore bosses need to become somewhat tougher and in Gurmur's case it meant gaining 33% more strength and stamina and 220% more resistances.

Gurmur also got a new trick up its sleeve and I have a feeling that all but the strongest of rogues will be crushed.

Anyway, at the moment I'm working on redoing the final battle and once it is done, it's time to do some in-house testing before preparing for the first round of public beta testing (for Windows version on Steam).

Well, the dungeon editor took a little longer than I thought but now it can do a whole lot more than it used to.

In the video you can see a small map being edited but now it's also possible to create wide, tall and large maps. These new larger maps made it necessary to come up with a new way to move the map around while editing because dragging didn't quite do it anymore.

I used to manually edit the quest map files to place specific creatures and set properties but now almost everything can be done through the editor with a few right-clicks.

I also used to have some debug and test code that had to be manually enabled while developing and disabled in the release. That code is now part of the dungeon editor for everyone to use.

The best part is that now it's possible run the map in the editor and make sure everything works as planned.

But all client side Java code has been sharpened and things seem to move forward pretty nicely. Here's a short video of two of the new editors that will be included in the game.

The first one can be used to localize almost all text in the game. The second one can be used to create new dialogues and or localize existing dialogues. At the moment there's only 4000 lines to translate plus however many lines there are in the dialogues so it shouldn't take any time at all (yeah right).

The locale editor still needs a way to show new and modified strings when a new version comes up and a way to merge existing locale files but those don't require more than ~100 lines of code to do and dungeon editor should be on the menu next week.

Yeah, I'm a bit late to celebrate that but after making particle effects for a few weeks and going through some 15000+ lines of AI and game logic code, this is where the game is at the moment.

There are still a lot of bugs and some old code to go through in order to get the game to behave like it does on the live version (I can spot about a dozen bugs in the video alone).

Anyway, once those are done, there are also some editors, server changes, Steam integration and finally the new content to do.