1.06 is coming up nicely and the latest changes that have been implemented can be found here.

Until now I've done map editing with a text editor simply because I've been too lazy to come up with a better solution (and there hasn't been a good reason to make one). Now, however, there is this new overlay tile set that pretty much made it impossible to create maps in a timely manner.

Also, it has come to my attention that some players have actually beaten the game and that is not acceptable =)

The following video shows one of the new creatures that is going to take care of the player survival problem and there's some map editing as well...

Wow. I don't know what else to say except thank you all! The green monster has been defeated and the journey may now continue onwards.

I finally managed to find some time to tinker with the new tile set. It still needs some programming for all the new bits and pieces to make it in the game but the following screenshot should give a rough idea what it will look like (without the bits and pieces). 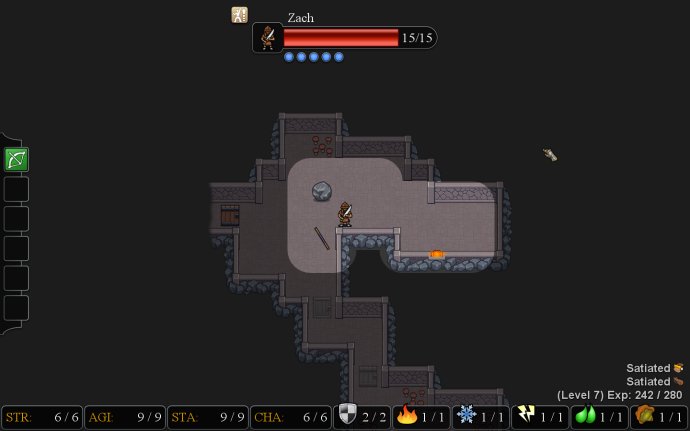 Wow, time really flies by when you are having fun working to earn enough to pay your daily fix of can shaped caffeine power ups. Anyway, although I haven't been very productive lately, my pixel oriented sidekick has come up with some new ways to die horribly:

I can almost see the brain blob mind controlling you while the tentacle strangles, pokes and sucks you dry!

Oh, and then there's a sketch of a new tile set. As you can see, it is a slightly more man-made than the dungeon tile set currently in-game and it should give some nice variety to the scenery. 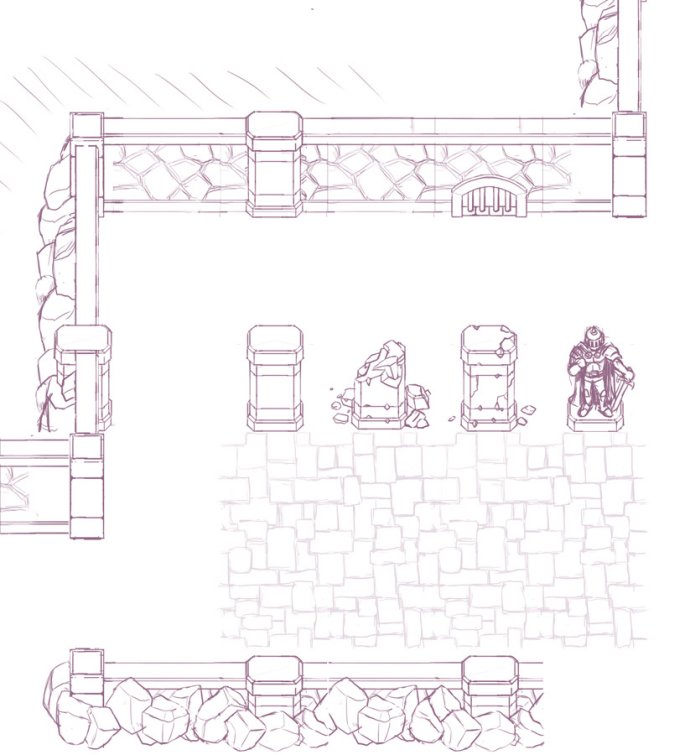 The version that is downloaded and run by the Desura app (1.05b) now contains all the necessary files.

There's a small issue with the version that is launched by the Desura application but I'm hoping it will be fixed at some point.

I haven't yet decided if the upcoming 1.05 has any new features or if it just fixes known issues. I have somewhat limited free time at the moment and anything fancy would probably take months instead of weeks. Anyway, the latest change log can be found here.

Rogue's Tale is now a part of the Hellish Dungeon Bundle along with Guy vs The Wicked and Nefarious Land and 99 Levels to Hell. Grab yours from IndieBundle.org!

There's now a forum available which is hosted on Desura servers. Feel free to start new topics and suggest new boards and I'll see if I can make them happen. I also started a "New Player Tips" thread that lists all default keys and mouse buttons to help you get started. I plan to update that thread with other tips as soon as I can figure out which issues are the most common.

As always, I forgot something from the package. This time it was the handmade dungeons that were supposed to make your short life span even more shorter! Unfortunately the whole release process is so time consuming that it's not feasible to whip out a new version just for them but fortunately you can grab them here and add them to the game yourself if you want.

There's three different installation versions of the game so you have do one of the following if you want to add the missing dungeons:

2. ShinyLoot and Epixx.org (Launcher) users should unpack the zip in the installation directory so that the resulting directory path looks like this: "Program Files (x86)/Rogue's Tale/data/dungeons" if the game is installed under program files.

3. Epixx.org (Client only) users should unpack the zip in the same directory where the client is unpacked in so that the resulting directory path looks like this ".../client_directory/data/dungeons".

Desura to the rescue...

If the demo feels too limited, you can get more levels and talents here:

You can still get a serial for full game by poking the king in the demo before March 15th (see full details on the January 9th post).

The chat has a bug (I forgot to add one line of code) and in order for it to work like it's supposed to you need to click once on the Common or Orcish and then Demonic.

Here's a few movies of sword-and-board gameplay from level 1 to 20:

Launcher and some bug fixes...

There's a new launcher application that automatically downloads and installs the latest version of the game. The launcher comes with an installer and if you use it to install the application under program files, it might require that you run the installed application as an administrator in Windows Vista and 7 (you will know if it says that "You can try manual install..." or if the client cries that there's a file system error while trying to play offline).

There's also a new version of the client with some bug fixes. Change log can be found here.

There is still a bug that sometimes vaporises your account even if you're not cheating. When that happens, do the following:

The reason why it must be done like that is that there is no way to restore a character while the server is running unless there already is a character with that name. If you fail to follow the steps above then there is nothing I can or will do.

P.s. if the vaporising happens to an account that has like one heritage and max level you have reached is 5, just start over and you're done a day earlier than by me restoring it.

Hotfix: Items should no longer dupe as often in the newest version (130128).

How can you get the full version?

There's been some questions about where you can find the full game so here it is in detail:

1. Download the game.
2. Create an Epixx.org account in-game.
3. Kill the current King (and loot his crown).
4. Cheer on the in-game chat and if I'm around you will receive your serial.
5. If cheering fails, send email to (nibbe at epixx dot org) and mention your account name.
6. Register your account in-game with the serial.
7. Logout and login.


Once you have done so, a license.xml is created in the game's folder that allows you to play the full version either online or offline. If you happen to lose the license file, you can always get it back by logging in on the Epixx.org server.

There is only one rule with the license file: If you spread it around, anyone who has it can send it to me and claim the account as their own. Future versions may require a new license file and whoever owns the account can get it by logging in, so try not to lose it.

Let there be light, Greenlight...

Full versions for everyone!!! Oh wait, there's this green monster on the way that requires lots and lots of clicks.