It's strange how my TODO list just keeps getting longer even when I get stuff done. It had about 120 entries around september, and now after completing a couple dozen of them, it has almost 150 entries. Fortunately most of them are somehow related to some other entry and when I get one of them done, I might get a dozen of them done, but then again, there are some entries that say something like draw 70 spell effect icons, or draw 40 spell icons...

Anyway, here's some of the weaker creatures and pets...

Five weeks of doing nothing at all, other than reintegrating back to working environment after holidays, and now I've finally managed to get some programming done on my free time. Anyway, what can be seen here is the options screen where it is possible to bind keys to actions.

In the example below, the control key is focused and its description is shown on the bottom left. The hotkeys are also bound on the keys used by some actions and vice versa, and the red color is there to highlight the fact that the key is not bound to the default key anymore.

Hotkeys are keys that can be bound on spells and talents when the respective windows are visible, and the spell or talent that is bound on hotkey 6, in this example, can be used by pressing either 6 or Y keys. 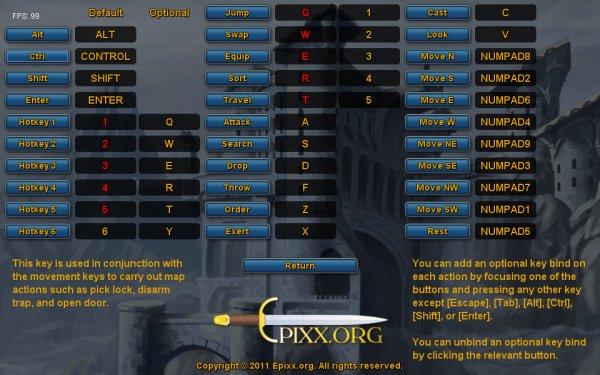 Most of the basic rules, combat rules, magic rules, spells, poisons, diseases, curses, and the ~90 different effects they create, as well as weapons, shields, armours, helmets, potions, tomes, and edibles, are implemented. The turn sequence is also in place with the exception that creatures don't do anything as the AI is missing, but they do take their turns and are affected by all the effects just like the player creature is. Most of the passive talents are implemented as well.

The 0.1 version, which will be the first one to be available for download, will have the following implemented:

- All rules, features, and items, listed under the game guide and equipment.
- All map objects (traps, containers, lights, etc.) contained in the default tileset.
- All interface elements and screens except the town screen and the credits screen.
- One creature with a simple AI using human tileset (human bandit that just wants blood).
- All spell and effect animations (using placeholder graphics).

Stuff still missing at the time of writing this: active talents, amulet effects, ring effects, scroll effects, wand effects, a couple dozen map objects, options screen, simple AI, and placeholder effect graphics instead of the "placeholder of a placeholder" white box that is in right now.

All this will hopefully happen in 2011.

Added a few missing potion descriptions and retouched some of the curses.

It's been a bit quiet on the rogue front lately as I've spent a few weekends doing this general-midi-synthesizer-drum-box-thingy that allows me to draw notes on tracks and make some noise, and most importantly, store the data in a nice human readable xml-format. 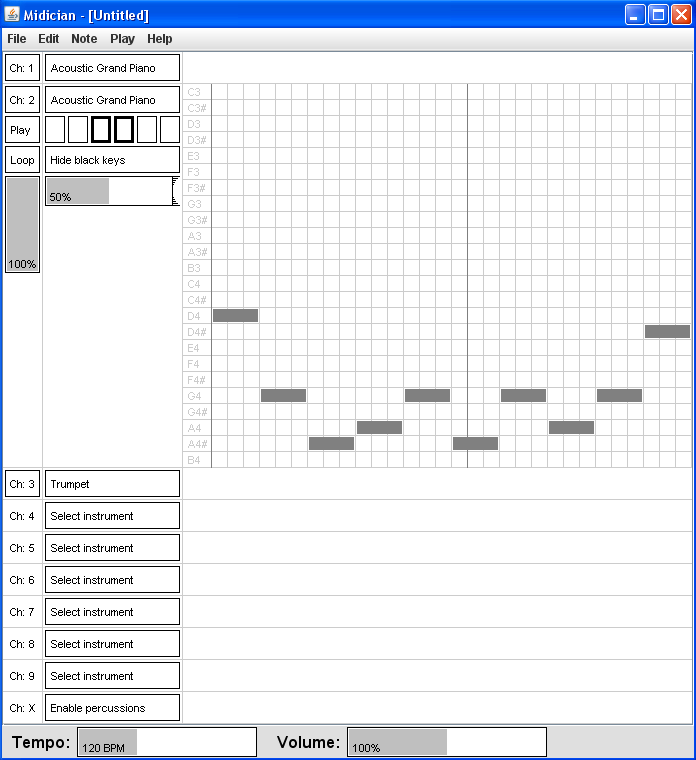 The 'Midician' was kind of a spinoff but not entirely unrelated to the rogue project as the same midi library that resulted from it will be used in the rogue.

Here's a sample exported mid from the Midician that most people should recognize, unless ofcourse, they've lived in a bottle or something: Godfather.mid

And here's a sample of a possible clip for a low health combat situation where the player is about to kick the bucket or something: CombatLowHealth.mid

Hmm, I can't figure out anything to say. I've been programming like a mad for a few weeks and now my mind is blank. New stuff includes at least item handling, inventory, scrolling combat texts, item tooltips, keyboard and mouse interface, as well as about a thousand other things I can't remember. Hopefully the video can show where the game is going at the moment.

After few days of being sick and too tired to do much, I got up and running and managed to whip out some content in the edibles section.

Two weeks and close to a hundred hours of spent time and I finally managed to finish the weapons, armours, helmets, and loads of other images in full size, and in the resized size as seen below, as well as update this website a few times.

Anyway, what this little tileset can help me do is to dynamically create the kind of toons as seen on the top of the image. Did someone say a roguelike where you can see the equipment other creatures are wearing, wooooot? 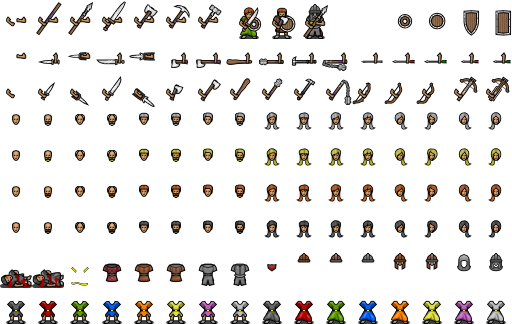 Two days of inventory design and programming and it's now possible to loot items using a keyboard. Few more days and it should be possible to do all the inventory actions, loot, equip, drop, throw etc. using either a keyboard, mouse click, mouse drag, or any combination thereof. 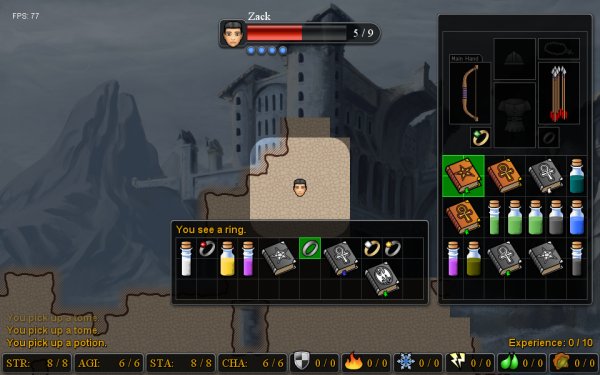 The tileset is finally finished and here's a screen of it in action. Quite a big difference compared to the straight walls and corners of the previous tileset. 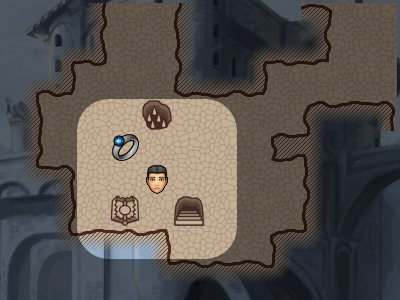 It seems that I'm gonna have to do a 'few' more pics after meddling around with Inkscape and the following toons popped out. It's fairly easy to programmatically draw the toons with the various items visible so why not just do it =)

I'm seriously questioning my sanity at the moment after spending a week and a half drawing a tileset and it seems like it's going to take at least another week for the rest of the tiles.

It certainly doesn't help with the insane feeling that there's ships sailing over rice fields, hundreds of meters over japanese inland, and little puffs of radioactive steam is considered of being released to keep the Fukushima Daiichi 1st reactor from overheating. Crazy shit I say, crazy shit, and, my condolences to the japanese people.

Anyway, crazy shit aside, what you see in the picture is four versions of each of the wall and floor tiles, doors, stairs, traps, containers, and various other tiles. The brown color separates the dungeon tiles from items and creatures. I noticed that it was getting hard to distinguish items, creatures, and dungeon tiles when they all had bright colors and similar shapes on them. 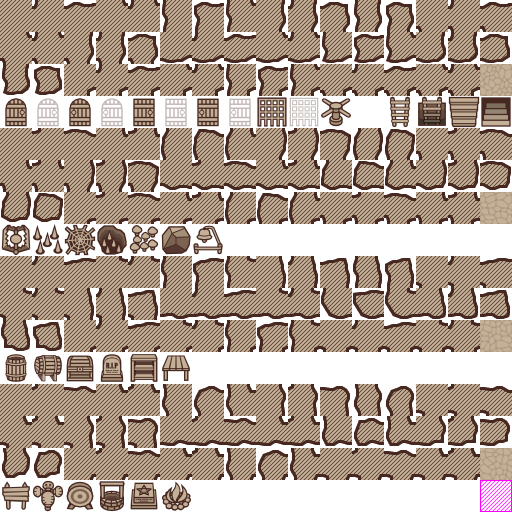 Fortunately everything is vector graphics and it's easy to resize the tiles if 32x32 pixels feels too small. I'm not yet sure if the game uses 32x32 or 48x48 pixel tiles, or if I'll just slap in 32, 48, and 64 pixel versions and let the player decide which to use. 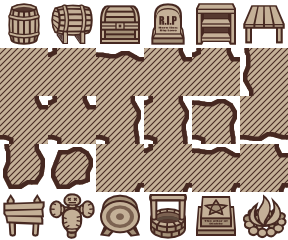 And here's a pic of the crossbows and bolts. There's a crossbow and a dwarven repeating crossbow, and there's also pics for the last ten remaining bolts. The main difference between the two is that the crossbow is a slow firing weapon and it requires that the wielder spends one turn resting in order to shoot again (counts as reloading).

The repeating crossbow is the pinnacle of technology in the game and there will be no guns or gunpowder weapons of any kind. I dunno if it's just me but I just don't think that it is possible to achieve a good fantasy setting where you have orcs, elves, magic, and machine guns.

Here's a pic of the bows and arrows. There's an orcish bow, a bow, and an elven bow. There's also pics for the last ten remaining orcish arrows, arrows, and elven arrows. As it turns out, elves are evil and they like black =) 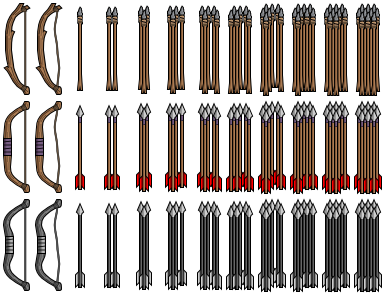 Few hours of fiddling around with inkscape and three new weapons are born. There's an elven throwing star, a dagger, an axe, and the sword shown the other day with slightly more battle damage than before.

I finally managed to finish the "theme" and descriptions of wands. Unlike most of the other items that contain both harmful and beneficial effects, wands are always beneficial to the user, that is, as long as they're not cursed or used incorrectly. Due to the low yield fantasy-WMD effect certain wands have, wands and scrolls of recharging will be quite rare.

And then there's the cartoons. I haven't quite decided whether I should go for the cartoon style as shown below, or go for some other style for the graphics. Another thing that needs to be decided at some point is whether there should be different item qualities (uncommon, rare, epic etc.) like in most computer games, or just items that the player can rename to match the item's current properties.

Oh right, the image below has a sword that looks like a long fat knife, a damaged sword, and a sad wolf. 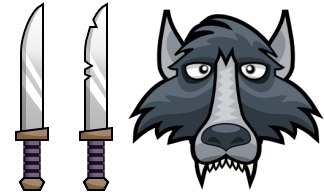 The game has printed stuff on the console window from the first day but now it prints them on the screen, or combat log, as well. The combat log consists of three lines that fade out when a new line is printed.

The combat log is not limited to a single color though, as one might expect from the image above. Every line can have multiple colors and can be animated in a number of ways, including moving, scaling, rotating, etc.

The next two steps

The reason why I chose to go the traditional roguelike way of showing abilities on the game screen was that I kept drawing the character screen over and over again with pen and paper and I just couldn't come up with a layout that would look good. 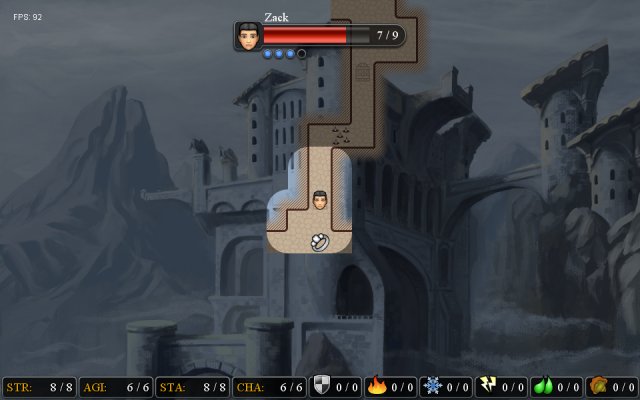 Two days of intense programming really pays off. I managed to improve the map generator code in a way that it always connects all rooms to the closest room instead of sometimes connecting them through another room and creating potentially ugly corridors.

I also added bear traps and dart traps in the map generation code along with the player actions related to them (search and disarm). Those two traps also added five new ways for the player to die, and those are two counts of stepping on the trap, failing to break free from the bear trap, and two counts of failing to disarm the traps. 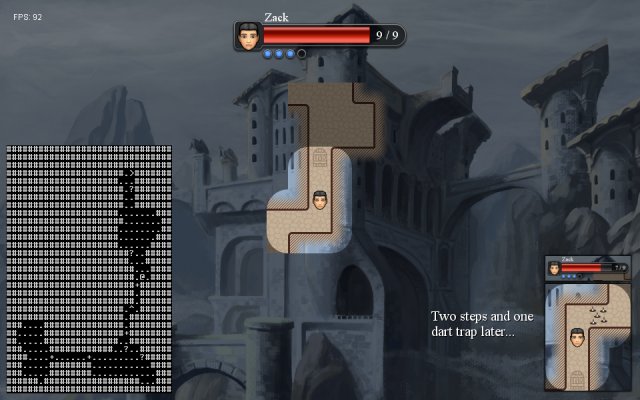 Another year and another backpack

Years fly by and UI elements just spawn out of nowhere. It's not yet final though, as I still have to figure out the way I want to handle money. If I choose to go for a simple solution where the coins are stored in a single variable and shown on the backpack, then there'd have to be some sort of display on the backpack.

Anyhow, here's a glimpse of the player's backpack with some items in it. 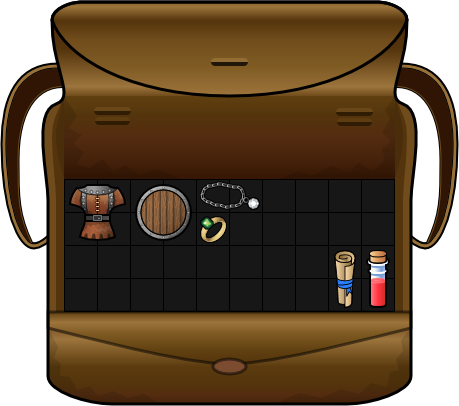